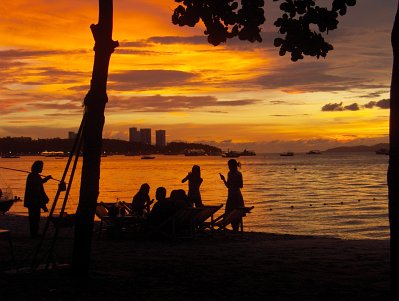 I sent this photo as a teaser to some friends who were coming to Thailand and were going to stay in Pattaya. Clearly they thought the photo had been touched up in order to make the sunset look more dramatic, but once in Pattaya they realised that the sunsets do actually look like this there.

Pattaya sunset This photo and the photo on the left were both taken on the same evening in November 2005 CE and are part of a sequence of four pictures (the other two have equally spectacular skies). The shots were taken with our HP R707 digital camera using a mini-tripod held against suitable tree trunks. The sunsets are pretty typical of Pattaya.

What is it that makes them like this? The short answer is that oranges and reds are caused by dust and pollutants in the air, so the redder the sunset the more there is in the air.

I've marked the approximate location the photos were taken from on Google Earth. If you look you will notice that across the bay from Pattaya is another part of Thailand. This long thin strip this far north shares the peninsular with Myanmar (Burma). Further south Thailand has the entire peninsular with coasts on both the Thai Gulf and the Andaman Sea (part of the Indian Ocean). It is down here in the south that you will find Phukket (in the Andaman Sea) and Koh Samui (in the Thai Gulf). Even further south the peninsular widens for Malaysia, with the tiny little island of Singapore at its southern tip.

The main coastal road running south in Thailand carries a huge amount of traffic and the road quality isn't always so good. The lorries throw up a huge amount of dust from the roads and have very dirty diesel engines putting out huge amounts of black smoke that can completely obscure the road. It is easy to imagine that this contributes to my sunset photos.

Another contributor is the huge amount of shipping that plies its way through the gulf. There is a huge port in Bangkok (Bang Na) and there are a number of other ports along the coast dotted around Pattaya (all visible on Google Earth). The ships are also putting a lot of fumes into the air.

The most obvious way to try to abate the pollution would be to force Thailand to use less polluting vehicles by introducing legislation to reduce emissions. This has clear environmental benefits for us globally (less greenhouse gasses) and for the Thais locally. All over a good thing. There is however a downside.

The less polluting vehicles also cost more to buy. An old lorry might break down a lot and pollute even more, but it doesn't cost much to buy. Wages are cheap in Thailand so it doesn't really matter if your driver has to wait one day a week by the side of the road to get his lorry repaired. It's still cheaper than buying a new lorry¹ [1Not that anybody would buy a new lorry. They'd instead buy a much cheaper new pickup truck. This would mean employing more drivers and would of course also mean a lot more vehicles on the road, but the per-vehicle pollution target of the legislation would be met, even if the net effect may well be more pollution.].

The net effect of forcing Thai businesses to use more expensive lorries is to push up the cost of Thai goods (let's use pineapples as our example). Pushing up the cost will mean that people will buy Malaysian pineapples instead of Thai ones and the Thai businesses will go out of business. This will certainly reduce the pollution, but it won't do anything to help Thailand. From the Thai people's point of view the pollution seems a reasonable price to pay for the increased economic activity. After all Thai people also want to be able to afford TVs and DVD players and I'm sure every lorry driver would love to be able to buy themselves an iPod — they're long boring drives after all.

So, forcing Thailand to unilaterally try to legislate its way out of pollution isn't going to work. But what if we can do it globally? This way it pushes the price of pineapples up from all countries more or less equally. This seems much better.

Although of course when you go into the supermarket now the pineapples have jumped in price. This means you're going to be less likely to buy a pineapple which in turn means that Thailand is going to be able to export fewer pineapples. At least it'll be getting more money for those pineapples though so it doesn't really matter.

Except it doesn't mean that either. All of that extra money is actually going to pay for new lorries. This isn't helping Thailand much, but it is helping the foreign companies (from rich countries) that sell lorries.

If our viewpoint is that the environment is much more important than anything else we can leave it at this. There will be less pollution because both the vehicles transporting the goods around will be cleaner and also because there will be less goods moving. For advocates of buying only local goods this seems like a clear win-win scenario² [2The Local food movement uses a variant of this argument to convince people that buying locally grown foods is better for the environment than buying imported foods.The problem is that half of the food miles are spent on the way home from the supermarket. The best way of reducing the environmental impact of food transportation is to walk or cycle to your local corner shop rather than drive to the cheaper out-of-town mega-supermarket. The ship carrying a million pineapples half way around the world uses less energy and causes less environmental damage per pineapple than a car driving a few miles to the supermarket to buy one.The leader in the The Economist discussing these issues in more depth is unfortunately subscription only.]. The problem is of course that the price for the increased good to the environment isn't paid by you and me who eat less imported pineapples, but is paid by the Thai farmers who can't sell their goods. This maintains the status-quo of rich countries consuming and poor countries having nothing.

It's good for the environment, but it's hardly fair on Thailand or the world's poor, who are mostly farmers.

So what else can we do? It turns out that the solution is actually quite simple. Buy more imported pineapples. This seems nonsensical at first. More ships, more lorries and more pollution. Very bad for the environment.

It has two other effects though. One is that people in the rich world all get to enjoy more pineapples. This will make you good, but it probably seems trivial in the grand scheme of things even though it will improve the quality of life of especially the rich world's poor through better access to exotic fruits.

The other is of course that we give more money to Thai farmers. Putting this extra money into their hands makes them richer too.

As Thailand gets richer it will have a number of effects. One is that richer countries don't put up with so much pollution. Thailand will want to cut down on its own pollution without intervention. This can be bad though as we've already seen, but there is an important difference in a richer country doing it.

Rich people also demand (and rich people are much more effective at actually getting their demands met) good education. Good education means that Thailand can start to export higher value goods than just pineapples. As Thailand slowly prices its way out of the pineapple exporting business it will start to be able to compete in new markets where a skilled work force is more important.

The increased skills and money also means, bizarrely, that it can keep itself in the pineapple business a little longer by increasing efficiency. More skilled lorry drivers who use the Internet and want to buy iPods demand higher wages. All of a sudden it is far cheaper to give them newer and bigger lorries³ [3This is because that the richer farmers can now better afford the much higher upfront cost of the big lorry because we've given them the opportunity to get richer first.] and not have them waste so much of their time sitting on the side of the road trying to fix their old lorry.

This scenario has already started to play out in Thailand, but not with agricultural goods.

The rich world's insatiable desire for more and more computers has made a direct contribution to the economies of many Asian countries. The reason is that globalisation and international trade have been allowed to work their economic benefits everywhere as there are few trade barriers in this area. As world-wide demand for cheap electronics continues to grow we can expect to see this trend continue to help the world's poorest countries, at least those stable enough to, and willing to, invest (or take foreign investment) into factories.

Agriculture is another matter however. The Common Agricultural Policy in Europe and farm subsidies and trade barriers all over the rich world stops us from helping the world's poor (mostly subsistence farmers) from earning money because the rich world won't buy from them (even worse, the subsidies often mean that rich countries have to dump excess food on poor countries meaning their own farmers can't even sell their goods in their own countries).

If you want to really get involved in helping both the environment and the world's poor then don't protest about globalisation, protest that the World Trade Organisation's Doha Round looks to be unable to agree that rich countries should allow their people to buy cheap food from poor farmers. This would help both the world's poor farmers as they can suddenly earn money, and also the rich world's poor as they'll spend less of their budget on food.

If you want to do a smaller thing though then cycle or walk to your local supermarket and buy some imported food. Find an exotic fruit grown in a poorer country and treat yourself and help a farmer at the same time.

The downside is of course that future sunsets in Pattaya may not be quite so spectacular, but at least this will be for the right reason.